Talent You Should Know : Rafael Rozendall
How Humans Experience Their Food

How To Die By Firing Squad 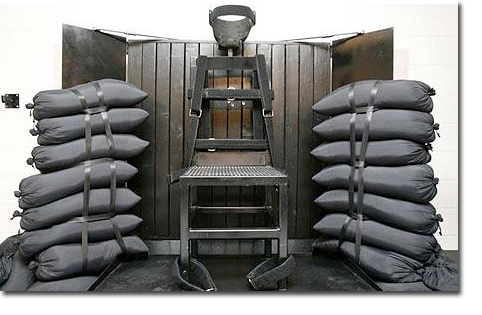 Shortly before Ronnie Lee Gardner was shot through the heart by a five-man firing squad at Utah State Prison, Mark Shurtleff tweeted: "I just gave the go ahead to Corrections Director to proceed with Gardner's execution."

"A solemn day," Mr Shurtleff typed, "Barring a stay Utah will use most extreme power and execute a killer. Mourn his victims. Justice."

Gardner, 49--who spent 25 years on death row for gunning down a lawyer during a failed court-room escape--chose to die by firing squad, an option open to him because he was convicted before Utah adopted lethal injection in 2004.

He was strapped to a black metal chair surrounded by sandbags to stop ricochets.

A white target was then pinned over his heart, a hood placed over his head, and five volunteer marksmen armed with .30-caliber rifles opened fire from behind a wall.

Only four of the weapons were loaded with live rounds and one contained a wax bullet, allowing the marksmen to retain some doubt over whether they fired the fatal shot.

The executioners were all certified police officers who remain anonymous.

They stood about 25 feet from Gardner. He was executed and pronounced dead at 12:17 am.

The coroner listed 'Cause of Death' on the certificate as 'homicide.'

Um, what century are we in?

Twenty years in this God-fearing country and I still don't understand its primal fascination with revenge. I don't deny he was a killer, but life without parole seems to be sufficient for every other civilized nation.

My trumping argument: Can we continue with state-sanctioned homicide if just one single person is executed and later found innocent?